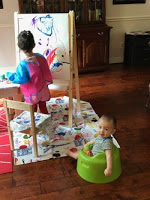 It wasn’t until I took a couple hours to work outside in my garden while Bill watched both kids one sunny Saturday that I realized I may actually be getting the hang of this ‘mom’ gig.
I came back in, sweaty and streaked with dirt and tomato juice and covered in red-ant poop.  (I can only assume the poop, judging by the amount of red ants in my front flower garden that my soil now consists of roughly 50% dirt and 50% red ant poop).  I think they eat their dead, don’t they?  Seems like an efficient-ant thing to do.  So at least there’s no ant-graveyards I’m mucking through.  Just ant-landfills.  Wait – do they eat their own poop!?  That would be REALLY efficient.
I digress.  There were a lot of red ants.  I don’t like to use pesticides in where I’m digging around so until I find the nest I’m enduring the infestation, carefully, for now.
I grabbed a quick shower while they both cried.  Then I fed Benji and got him down for his nap, gave Ellie her second breakfast, and started folding the laundry.  All while Bill sat in the big brown chair in the living room, TV off, gazing out the window without moving.
Have you ever seen someone in a catatonic state?  They’re there, but no one’s THERE, you know?
I waved my hand in front of his face.  I asked if he was ok.  Slowly his head turned to my direction but his higher-order brain functions were slower to react.  No sound came from his mouth as he stared bleakly at me.
“Are you ok sweetie?  Did they break you?”
He seemed unable to speak.  I do so have compassion for broken things.
I ruffled the little hairs on his head.  “Why don’t you go wash the cars?”  I said gently.  He loves to wash his car.  That seemed to perk him up because although he still wasn’t speaking, he did shuffle out to the garage with only a minimum of strange ‘nuh-nuh-nuh-nuh’ sounds and repetitive rocking.
It took him until the next day to be back to his usual self.  And that’s when I thought, huh.  I’M not almost ready for the loony bin.  Well, I am, but in the high-functioning wing at least.  That’s when I realized, wow.  I’m DOING THIS.  And since everyone is healthy and safe and (mostly) clean at the end of the day, I’m doing a pretty good job, too.  Good job, me.
It’s nice I had that revelation because he’s been away this weekend on a quick weekend trip with some friends.  Before you react, let me tell you I had two choices for this trip.
1) Tell him no, you can’t go on your yearly trip.  (Ew, hate that).  Stew in resentment and bitterness and begrudge every tantrum and epic mess I have to clean by myself and ensure HE has a terrible time, knowing I’m suffering and he’s living it up.
2) Store up some good karma for me by blessing his vacation and sending him nothing but good thoughts for a relaxing and fun time away, knowing my time will come too, it will just take a little longer.
I’ve opted for ‘storing up good karma’.
Why?  Because it makes me happier.  And, this weekend hasn’t actually been too bad.  It hasn’t been EASY, but it’s been fine.
My mantra for this weekend (Mantra being something you say over and over again) Be here.  Now.
It blows my mind how often I’m not here, now.  I’m driving but my mind is on tomorrow, or next week, or next year.  I’m showering but I’m thinking of what happened yesterday, or what I need to do tonight.  It is rare, extremely rare, for me to just Be Here.  Now.  And I’m like, the ‘mindfullness lady’.  I am always trying to be ‘present’ in the moment, trying to let go of plans for tomorrow and my obsessions over what happened yesterday.  Just focusing on what is happening around me at that moment.
And you know what?  It’s usually pretty pleasant, right now in THIS moment.  Being able to let go of the frustrating things that JUST happened (the tantrum about getting water instead of juice in the sippy cup.  Or the shock and indignation of yet another diaper change).
Everyone is quiet RIGHT NOW.  The sun is shining.  There are cookies to eat.  Here.  Now.  Everything is wonderful.
I might lose my cool in two minutes.  But right now, I’m patient-kind-mama.  The kind of mom I want to be.  And in three minutes, after maybe I lose my cool, I’ll be patient-kind mama again because I’m not dwelling on my mistakes.
It’s not a bad way to live.
“You cannot both be unhappy AND be fully present in the now.”  Eckhart Tolle.