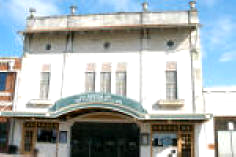 Bill took me Into the Woods today.
He took me to a community play based on the movie, based on multiple fairytales, enacted in good ‘ole Conroe at the Crighton theater. The theater itself was interesting – built in 1934 if you must know – very retro. It was in an old part of Conroe, a place I had no idea even existed. It felt like stepping back in time. Two competing theaters on opposite corners. A barbershop. Three lawyers offices sandwiched between a gift shop and a hair salon. A PI office. I peered inside the dirty windows searching for a man in a trench coat and hat, leaning against a pock-marked desk, chatting to a fancy lady smoking a cigarette. Something moved in there but I’m pretty sure it was a cat. Or the restless ghost of an unsatisfied client; it is almost Halloween after all.
I digress.
It reminded me again how dark and violent the original fairy tales were. Grimm tales indeed. With loads of subversive messages for women and children.
Gasp! Hidden messages! Say it isn’t so!
It is so.
Hidden messages like; wait for your prince – stay pretty and quiet (preferably totally comatose) until he arrives and rescues you with a kiss. Then go stay perfect and happily ever after.
Messages like; don’t go out after dark. Don’t go into the woods. Don’t stray from the path. The world isn’t safe for young women to venture out alone. All our favorite fairytales have them – subtle messages underneath the obvious. I know it sounds a little intellectual and weird but next time you watch a movie or read a book (especially old horror movies) ask yourself two questions. Who is punished? Who is not? These two questions will tell you what the underlying themes are, the ones you don’t notice unless you’re watching for them.
Beauty and the Beast used to be one of my favorite movies. Until I had Ellie and I watched it again and I realized I don’t want her to think it’s okay to be kidnapped and imprisoned by a beast of a man. I don’t want her thinking she can change his ‘misunderstood’ heart. Girl, you better run from that dude. Forget the beast, marry the baker. Or better yet, go get a degree and be a librarian. Books are the only true love you need Belle.
I really liked what this play and the movie did as well – and that was to keep telling the story AFTER the happily ever after. After they fed the narrator to the angry giant it got REALLY interesting. The princes were hilarious. One line was delivered particularly well – one of the Princes’ was trying to win over his wife after he’d cheated on her with a maiden in the woods.
“They taught me to be charming, Princess, not sincere.”
Let’s teach our boys to be sincere, and our girls to be brave. It’s a new world out there folks, and my daughter will have choices and possibilities our grandmothers would only have dreamed of.
And maybe it’s time for some new fairy tales, yeah? Is someone on that? Someone besides the Shrek and Moana people?
Lastly, a longish-but-worth-it quote from my girl Tay-Tay.
“When I was a little girl I used to read fairy tales. In fairy tales you meet Prince Charming and he’s everything you ever wanted. In fairy tales the bad guy is very easy to spot. The bad guy is always wearing a black cape so you always know who he is. Then you grow up and you realize that Prince Charming is not as easy to find as you thought. You realize the bad guy is not wearing a black cape and he’s not easy to spot; he’s really funny, and he makes you laugh, and he has perfect hair.”
― Taylor Swift