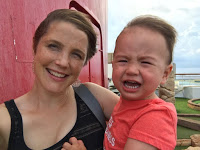 My blog entry is a little late this week because I’ve spent the last four days traveling on a gigantic ship from Galveston to Mexico. With Bill and my babies.
Alright let’s review the low lights. The cruise wasn’t really set up for kids under 2. He couldn’t go into the pools on the ship at all, and yep they were watching closely. They had a ‘camp’ for kids but would only watch kids under 2 for two hours in the morning (but they wouldn’t watch Ellie the same time). And then again from 10pm-1am. Who drops their under 2 year old at a crazy, noisy, smelly day care center after their bedtime? After my bedtime! 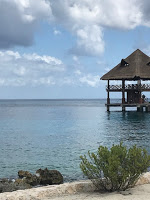 Someone who doesn’t have a sweet little guy who is usually out by 7:30pm that’s who.
So basically we managed one hour the whole trip where they agreed to watch both of them at the same time. They didn’t communicate that properly at any of the FOUR times we talked to them. They kept giving us a little index cards with the under 2 times but not with the over 2, anyway.
For that one hour I had a glass of white wine and read my book and sat on the deck in the sun and it was lovely.
I digress. Let’s just say I won’t go on another cruise with babies unless it is DISNEY related, okay dokay?
Benji’s nap schedule was totally messed up and so he was a raging toddler mess most of the time.
No WIFI. (This is also in the plus column)
The ship was huge and I was still getting antsy and restless. (The walls are closing innnn, ahhhhh, let me OFF!!) Wait – free fro-yo!
The highlights!
I saw dolphins in Mexico. Swimming with Ellie in the pool while dad stayed with Benji in the room while he napped. While they both napped.
Swimming with the kids in the ocean, hanging around on hammocks on the beach. 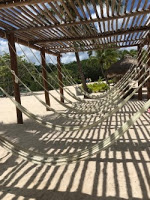 Watching Peter Rabbit with the kids – outside on deck on a big drive-in type movie screen.
Towel animals, am I right!? 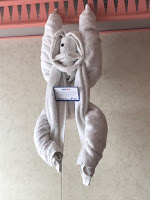 Eating dinner at a ‘fancy’ restaurant every night.
The ocean at night.
Fro. Yo. FRO YO!
Art work lining the hallways.
Violin concerts in the American Lobby.
No Wifi.
Matching manicures with Ellie. (Purple. Of course.)
Dancing waiters on the tables.
Dancing waiters period.
Coming home again!
“I haven’t been everywhere, but it’s on my list.” Susan Sontag