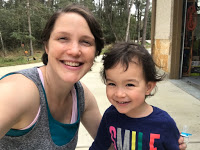 Ellie had a play date this week – right between getting over a mysterious fever and then coming down with a cold.  It was with her friends from school, at a splash park.  Maybe I should have cancelled but the fever was long gone and the cold hadn’t shown yet.
Anyway, it’s kind of fun meeting with people who are FROM Texas, and also who don’t have anything to do with ExxonMobil.
(No offense to all the wonderful ladies I know and love who I met working there myself, through Bill and the EM groups I’ve joined.)
Anyway, the problem is the same, really, as in the EM groups.  I feel like whenever I meet up with them I’m walking onto the set of ‘The Bold and the Beautiful.’  And I’m more like, ‘Coronation Street’.  You know?  I like to think I’m shabby-chic but…maybe I’m just shabby?
Will Ellie ever be embarrassed by my wrinkled shorts and barely combed hair?  I mean really, I could have at least put make-up on.  I was so busy trying to get both babies out the door on time (fail – 20 mins late) I forgot to look at myself before I left the house.  Again.  As usual.
I totally expect teenage-Ellie will be embarrassed by my ANTICS.

Singing in the car.  Kissing her goodbye in front of her friends.  Being weird about when she can have earrings.  (12?)  Being weird about when she can date.  (37?).
But I’d hate for her to be embarrassed because I couldn’t be bothered checking to make sure my blue shorts don’t clash with my bright pink owl T-shirt.  (This is an actual shirt, one of my favorites until a sweet lady told me her 12 year old daughter would just LOVE that shirt.)
She wasn’t being mean.  She was being honest.  Cluelessly telling me my fashion sense would intrigue her pre-teen.  She smiled.  I shriveled inside, just a little bit.  More like a sigh.
I wore it because it was one of my ‘new’ tops I just bought at a fancy boutique place.  I was trying to impress them, I guess?
Mission ‘I’m a well dressed adult’….Fail.
Honestly I don’t know why I bother wearing anything other than yoga pants and tank tops.  (Actually getting time to GO to a yoga class is a complete fantasy).  But at least I don’t have to iron yoga pants.  And they’re usually black so they match with anything, AND hide the spit-up/finger-paint/avocado/brown stains that are PROBABLY chocolate I end up walking around with.
Anyway.
So I ironed some shorts.  And I’m going to try and check my reflection before I leave the house.  I am, after all, not a college student any more and I suppose I shouldn’t present like one.
Ugh.  It just takes SO MUCH EFFORT to put myself together before I leave the house.  I think, at almost 40 though, I need to bite the bullet, put on my big girl pants, and then iron them.  Or, ah, iron them first, THEN put them on.  Yeah.
Not because I want people to like me, they will or they won’t and all the non-wrinkled shorts and stylin’ outfits in the world isn’t going to change that.  More like, I want to go out in public and NOT feel like a total schlub.
I digress.  I defer to Tommy in this matter.
Tommy JEFFERSON, of course, who did you think I was talking about?
“In matters of style, swim with the current.  In matters of principle, stand like a rock.”  Thomas Jefferson.

East coast Canadian native A.D Yeh received her bachelor degree in psychology and literature from Mount Allison University in Sackville, NB, Canada. She helps the online writing community at DIY MFA (https://diymfa.com/) by day and spends her nights writing fantasy novels and poetry she would like to read. She also teaches a love of gardening to pre-k kids in her physical community. She lives with her husband, two human children and two fur babies in a quiet corner of Texas. View more posts