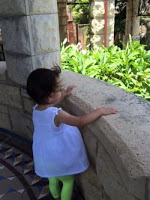 “Whatever you think you can do, or believe you can do, begin it.  Action has magic, grace and power in it.”  Johann Wolfgang von Goethe
This is one of my favorite quotes – I actually have it taped up to my closet wall.  These past few weeks have been a flurry of fun activity for me.  Applying for blogging jobs (they PAY you for this!?) writing articles, even submitting a few of my poems.  I didn’t get the blogging job but if there’s one there must be more.
I started my own website and figured out how to link it to my blog and vice versa.  And you know what?  That was REALLY FUN.  I think everyone should go out there and make a website, just for the heck of it.
During all this fun creative activity baby Yeh # 2 has been plodding along, growing steadily.  I’ve reached my half-way mark.  Ellie is also growing steadily both in height (Yippie someone in this family might be able to reach that bowl on the top shelf someday!) and in maturity.  I almost want to gather her up and put the ‘growing up’ back in the box.  She’s still a baby!  But mostly just in the mornings and at night when she’s tired.  The rest of the day she is gangbuster exploring, talking, asking questions, going to potty, making friends and swimming like a fish.
As the baby grows (and me, ahem) and Ellie grows I can feel the deadline of the birth counting down.  The day when my sweet, only baby who has had all of my and dad’s attention lavished solely on her will now be split with another soul.
It won’t be equal attention either, not for the first few months.  My anxiety about how she will feel, both when I’m not at home for a few days for the birth (for the first time EVER away from her at night) and during the ‘new baby’ transition is growing too.
Last night I woke up in a cold sweat, the vestiges of a really bad dream still making my stomach turn in knots.  You’re going to laugh but for some reason I left Ellie with Donald Trump.
I was apparently still married to Bill but had been married to the Donald at some point (that’s enough of a bad dream right there but stay with me) and it was his ‘time’ with Ellie.  Then we had a hail storm.  And he lost her because she was scared and I wasn’t there.  And his assistant found her.  Then lost her again, outside IN the storm and I woke up still searching for her, running between turkey-sized hailstones frantically.
Sometimes if I have a bad dream I can imagine how it SHOULD have gone when I wake up (I found her, everything was fine) but this time I couldn’t even go back and think about it again.
Bill and I were talking about the plan for the birth day and the few days after right before we went to sleep so maybe tomorrow night we’ll talk about bunnies and rainbows before bed instead.
In any case, the anxiety I felt at 4am was much worse than now during the day.  Everything always is when your ‘freak-out’ brain has full court and no distractions in the quiet hours of the night.
I remember a co-worker years ago telling me about a dream SHE had, her first baby was turning three and she was due in a few months.  It was much along the same lines, anxiety over how the ‘baby’ was going to cope and how in the world one will be able to lavish love and attention on both and still stay sane at the end of the day.  Doesn’t this one child take up your whole heart right now and more?
But you know the same thing will happen with the second baby and then, won’t your heart just BURST INTO A MILLION PIECES!?
At the time I thought she was sweet but silly.  Of COURSE she could love them both.  Of COURSE her first baby would be just fine.  And now…and now I see logic doesn’t matter a lick.
So, there’s that.
Also, my birthday was last week.  I’ve decided now that I’m older that age doesn’t matter a lick either.  Someone smarter than me said, ‘Growing older is inevitable, aging is not.’
So, if you’re anxious and logic isn’t releasing the stranglehold it has on you…wait for morning.  Eat some sugar pops.  See how you feel.   If you don’t feel better…write about it.  On your OWN website you created!
“Only by joy and sorrow does a person know anything about themselves and their destiny.”  (Our friend Goethe)

East coast Canadian native Angela Yeh received her bachelor's degree in psychology and literature from Mount Allison University in Sackville, NB, Canada. She is a staunch advocate for writers and literacy/learning with her online writing community, coaching, motivating, and encouraging writers at DIYMFA.com. She writes a regular column, Poetry Rocks! also at DIYMFA.com She lives with her husband, two lovely human children, and two cranky fur babies near Houston, Texas. You can check her out on Insta - @thatpluckygirl - or her website, www.thepluckycanadian.com View more posts