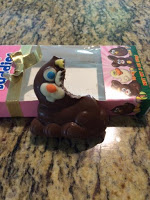 “Whenever I held my newborn baby in my arms, I used to think that what I said and did to him could have an influence not only on him but on all whom he met, not only for a day or a month or a year, but for all eternity—a very challenging and exciting thought for a mother.” —Rose Kennedy
First, HAPPY EASTER!
Second….don’t judge me but I have a confession to make.  A secret I’m ashamed to admit.  Remember, this is just between me and you.  And no judging!
Ellie is addicted to my IPAD.
She calls it ‘ba-baba’.  She screams for it morning noon and night.  I’ve actually heard her cry out for it in her sleep.  Houston…we have a problem.  Or, as Whyat says, ‘We have a SUPER big problem.  And when we have a SUPER big problem, we look…..in a book…’
Problem is everywhere I look it’s only judgement and recrimination.
As in, ONLY HORRIBLE PARENTS LET A 2 YEAR OLD PLAY ON A IPAD INSTEAD OF MEMORIZING THE ALPHABET.  Or polishing her shoes.  Or studying the Emancipation Proclamation.
Anyhoo, from what I can gather, she’s not the only one.  Apparently it is the crack cocaine of the toddler world.  And my daughter is leading the wave of adorable little addicts.
She’s down to an hour in the morning and that’s it, all day.  Until I break the stranglehold it has on her this is going to be a very miserable week.  It’s not that we usually let her on it all day or anything, but it has been oh so convenient when we travel, when we’re eating breakfast and cleaning up or making supper.
Well, no more.  When she screams for something THIS much, it must be terrible for her.  The only other thing Ellie wants this bad are chips.  Or, ‘Sips!  Sips!  Yummm…’   Which, I know, I know, SUPER bad mom of the year I let her eat chips instead of organic Oat and Quinoa and Barley muffins made by an Amish woman who hasn’t eaten a chocolate chip ever in her whole life.  I digress.
Starting as soon as I finish this blog the IPAD goes away for the day.  Yep, she’s on the IPAD right now.
How did you think I was writing this!?
She isn’t one to read quietly to herself.  Maybe I’m being a little hard on her, after all she hasn’t learned to actually read yet.  (What’s the problem, Ellie, Ben Franklin was 3 when he learned to read!)  He must have read quietly by himself in a corner, NOT destroying his neural pathways by staring passively at a flickering screen.  I’m freaking myself out.  What’s happening to her brain!?
This blog is done.  I’m off to wean my baby off the IPAD, and hopefully back onto the path to a decent college.  (It’s too late for Harvard, but maybe if I cut out the IPAD now she can still make it into a decent local Texas University.)
After that I’m off to do what every ‘terrible’ mom does.  I’m going to eat chocolate and commiserate that I’m not the WORST parent ever.  There are parents out there worse than me.  Somewhere.  Maybe I should google it on my laptop.  Or my IPhone.
GASP.
I may be part of the cocaine-IPAD issue.  !  I need to put away MY ‘Ba-baba’s’.  Just before I do, I will leave you with this thought.
If there is anything that we wish to change in the child, we should first examine it and see whether it is not something that could better be changed in ourselves. —Carl Jung

2 thoughts on “Secret Confessions of a Not So Perfect Mom”