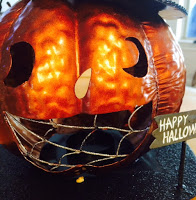 First, HAPPY ALMOST HALLOWEEN!!  My second most favorite holiday.  I’m getting dressed up as a ‘good witch’ but minus the princess garb a la ‘The Wizard of Oz’.  Why does the good witch have to look like a lost princess and the bad witch get the cool gear?  I intend to make THIS good witch look kick-ass (sorry mom, butt).  Pictures may follow.  I aim for kick-ass and (sorry, butt) if I end up with ridiculous but cute well, I’ll cut my losses.  ANYWAY, it’s also almost…Meatless Monday!
YESSIR!  I am taking the risk they’ll kick me out of Texas by having and admitting to…MEATLESS MONDAY.  But I will take the risk of frightening my friends and neighbors and I will tell you why:
For my HEALTH:  Less meat means I’m cutting my risk of getting cancer, diabetes, heart disease, stroke, and less of a risk for me but still, obesity.  Just by eating meatless ONE day a week.  I’d stand on my head and read the constitution in Spanish five times a day if it meant I’d cut my risk of ALL these diseases.  So, not eating meat for one day a week?  Um, I can do that.
For my WALLET: Meat is expensive.  One day a week of no meat means I save about $1,200 a year.  That’s not enough to buy that mansion on the hills of the south of France but…it’s nothing to sneeze at.
For the ENVIRONMENT: Ellie has to live here on her own in about 17 years.  I’d like for it to be a reasonably pleasant place to be.  Besides reducing green house gases and reducing fuel consumption did you know it takes about 1,850 gallons of water to produce a single pound of beef, and about 39 gallons of water to produce a pound of vegetables?  The good people of California may be interested to hear that.  And, easy on the almonds you guys ok?  Jeepers.
The ONLY problem is…rethinking the ENTIRE WAY I’ve been raised.  Vegetables as the MAIN dish, not just the side dish?  Unheard of.  Meat.  Potatoes.  And a few green beans cooked to death and you will LIKE IT…!  Actually dad always had a small vegetable garden so we had fresh vegetables every summer and fall.  But still, having vegetables as the MAIN dish and not just the grateful sideshow?  Craziness.
The first few times I had meatless Monday Bill grumbled about ‘where the rest of the meal was…’  We really had to rethink what a ‘meal’ meant.  It didn’t HAVE to include meat as the main dish.  In fact, it probably shouldn’t.
Us Westerners lead the world in cancer, diabetes, heart disease, stroke and obesity rates despite being the one of the world’s most developed and technologically advanced society.
We also lead the world in amount of meat and dairy consumed.
We’re ‘rich’ and we suffer from the ‘rich’ kind of diseases.  We won’t die of rickets but our arteries are slowly being plugged up from too much animal fat.  Read ‘The China Study’ if you’re interested.  (Or watch the documentary).  Who has time to read when you’re trying to figure out how to make a meal using no meat and still have it be easy, quick, and filling!?
There’s no doubt in anyone’s mind now after all the studies published recently that eating less meat and dairy and eating more fruit and vegetables will make you live a longer, healthier life.  Now to move that knowledge into action.  It isn’t easy.
Life is hard enough without having to research new recipes and buying produce you don’t normally buy and figuring out how to cook it right.
But enough whining, just do it already Angela!
SO for the last few Mondays I’ve been using the slow cooker (veggie stew, super easy) or making veggie spaghetti – (even easier.)   Saute a ton of veggies, whatever you like, add tomato sauce and bring to a boil then simmer, cook da pasta, add some garlic bread and viola – a filling, vegetarian delight.  But I’ve decided to branch out from these two dishes, the only tasty and filling vegetarian dishes I know that use all the ingredients I may already have in the house and….bought a spaghetti squash.  Ba ba baaaa.  I’ve never bought one before.
Apparently all I have to do is cut it half and microwave it for a few minutes in water to make it soft, then take out the squash and pull it with a fork to make it stringy?  Then saute some veggies, stewed tomatoes, garlic, onion, zucchini, green pepper, beans and ladle it on the squash.  Easy peasy?  We’ll see.  Not as easy as the frozen lasagna I’ve got in the freezer that’s for sure.  But you know what IS easy?
The decision to eat less meat.  To do what I can to improve not only my own health but also my family’s health and the PLANET’S health at the same time.  It’s a no brainer.
Live long and prosper my friends – and long live Meatless Monday!!  Don’t be a chicken…dooooo it!  Just don’t tell my neighbors.  Tar and feathering are not in the distant past in these parts…

East coast Canadian native A.D Yeh received her bachelor degree in psychology and literature from Mount Allison University in Sackville, NB, Canada. She helps the online writing community at DIY MFA (https://diymfa.com/) by day and spends her nights writing fantasy novels and poetry she would like to read. She also teaches a love of gardening to pre-k kids in her physical community. She lives with her husband, two human children and two fur babies in a quiet corner of Texas. View more posts