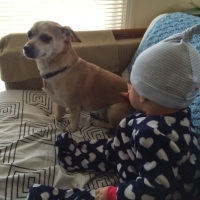 The dog threw up on the rug a few days ago.  Then the baby started to cry, and she STUNK.  Immediately I’m stuck between the two of them.  Which gets priority?  Probable massive poop or the throw-up slowly congealing on the one place in the whole darn living room where we have a small rug?  Why am I not working in a nice, clean, quiet office again!?   WHY?  Why can’t Toby throw up on the hardwood where it’s easier to clean?  WHY!?
Crying baby trumps cooling throw-up.  And it was a good thing.  There was poop to her shoulders.  To her SHOULDERS!  Stephen Hawking step aside, I’ve figured out how to get a onsie over a baby’s head that is COVERED in poop without getting ANY in her hair or in her ears.  Step aside Stephen, step aside.  Surely the answers to the unified field theory are nothing compared to the complexity of managing a poopy onsie over a large baby head without transferring said poo.  And then transferring said baby to the bath without having a Chernobyl-sized leak all the way there.  Success.
Having said that, I have been known to just CUT the poopy onsie off her body…yes, yes I have.
Poop is groooooosssss.  Ew, ew, ew.
I don’t care what they say, even when they’re your own babies it’s still POOP.  It has never nor will ever smell like sunshine and roses, no matter how cute the tiny tush it comes from.
I’ve said way too much about poo already.  Ok one more thing.  I was with another mom a couple years ago who also happened to have a dog who had left some poo in the backyard.  As the toddler was running out I (laughingly) told him to watch the poo!.  (Small boys love that word.  Some adults too.  I digress).  She politely told me that she doesn’t allow her child to say the word, ’poo’.  (I can’t mimic the disgusted, superior look on her face that made me want to punch a caterpillar but you can imagine.)  What do you call it?  I asked, confused.
‘Ka-ka’.  She said.
You’re coo-coo I thought, and probably didn’t say.  And right there I thought, that kid is now inheriting his mother’s weird aversion to the word poo.  Some mom’s be crazy.
I can’t help but wonder what weird things I’m making Ellie endure I don’t even realize.  The Cheerio song I sing her in the morning?  (I can just imagine the first time she sleeps over at a friend’s house and asks when her mom is going to sing the ‘breakfast song.’)  Blank stares.  The lunch song!?  She will ask, incredulous.  Poor Ellie.  She has no idea how weird I am.  When she finds out at least I will be able to say, hey, kid, at least I didn’t have a hang-up about the word ‘poo’.  You can say it all you want.  But you’re cleaning it yourself from now on ‘cuz, EW.

5 thoughts on “Adventures in Mommy-hood”